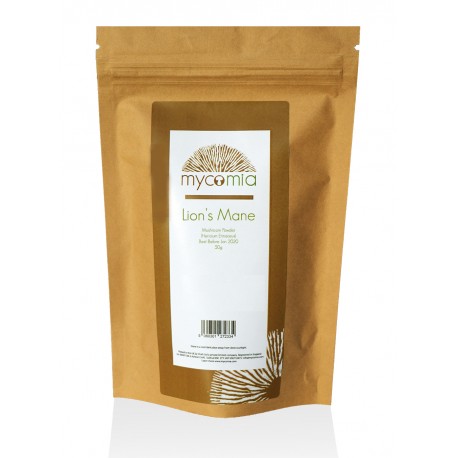 Notify me when available

Hericium Erinaceus, commonly known as Lion’s Mane, is a choice edible mushroom from the tooth fungus group. Its distinctive appearance has given rise to many names, including: bearded tooth mushroom, satyr's beard, bearded hedgehog mushroom, pom pom mushroom and bearded tooth fungus. Lion’s Mane is native to Europe, America and Asia and has a long history as a medicinal mushroom. Touted by health gurus as brain food, Lion’s Mane is currently the subject of cutting edge scientific research.

Hericium Erinaceus contains many polysaccharides, such as B-glucan, heteroglucans, heteroxylans, and several cyanthane derivative triterpenes known as hericenone and erinacine.

Superstar mushrooms should never be used instead of modern medicine.

Allergy advice: It is always a good idea to try new foods in small amounts to ensure that it right for you. Some mushrooms can produce allergic reactions, so we suggest that you don’t consume too much the first time you try them.

Usage
Our mushroom powders can be mixed in a superfood smoothie, juices, made into a tea or sprinkled into food.

Mushrooms are around 92% water so dried powdered mushrooms will go a long way.
Suggested dosage range is 1-2g per day.
1 teaspoon equals 1.5 grams.