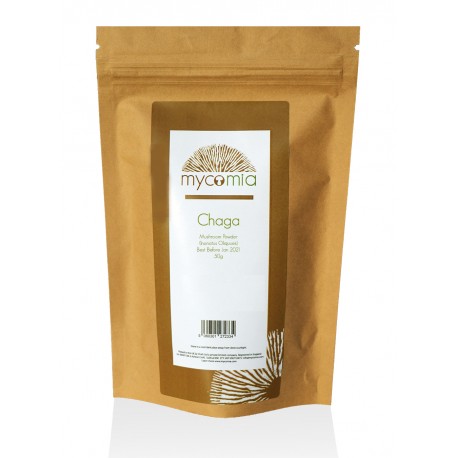 Notify me when available

Inonotus Oliquues, commonly known as the Birch Conk in the UK, is a parasitic mushroom that attacks birch trees native to northern Europe, Asia and America. Chaga has a long history of medicinal use in Russian and Eastern European medicine and its extracts are gaining increasing attention in modern medicine.

Our organic chaga is grown on birch trees in Russia.

Powdered chaga is traditionally used to brew a beverage resembling coffee or tea.

Superstar mushrooms should never be used instead of modern medicine.

Allergy advice: It is always a good idea to try new foods in small amounts to ensure that it right for you. Some mushrooms can produce allergic reactions, so we suggest that you don’t consume too much the first time you try them.

Usage
Our mushroom powders can be mixed in a superfood smoothie, juices, made into a tea or sprinkled into food.

Mushrooms are around 92% water so dried powdered mushrooms will go a long way.
Suggested dosage range is 1-2g per day.
1 teaspoon equals 1.5 grams.